“Another new young author, “Gordon Daviot”, the pen-name of a woman writer who is likely to do big things…”

I was delighted to receive a Gordon Daviot / Josephine Tey gift in the post the other day: a copy of The Stage from April 1933, containing a review of her first play Richard of Bordeaux.

The magazine was sent to me by Earl Young, after I spoke last year to his book group in Connecticut (via Skype) about my biography of Josephine Tey. The Skype chat was organised by another member of the group, Bernie Pitterman, who got in touch with me via the Contact page of this website. Their Connecticut book group had just finished Josephine Tey’s The Franchise Affair and had a number of great questions about the book, and about the real life of Josephine Tey. We had a fascinating discussion (why is social standing the key to The Franchise Affair? If you could interview Tey today what three things would you ask her?… and many more questions!) – and now, this gift arrives in the post.

I have a small collection of contemporary articles and magazines featuring and reviewing Josephine Tey / Gordon Daviot and her work, and two of the best things about them is their immediacy, and the context they give. This is how Tey’s work was viewed when it was first written – and this was what was going on when she first published it.

This article doesn’t give any new information about the theatre production of Richard of Bordeaux, but it gives a lovely flavour of the way it was received: titled “John Gielgud’s Rising Star”, it talks about Gielgud (“a member of the famous Terry family”), his previous play Musical Chairs and how his performance in Gordon Daviot’s Richard of Bordeaux “is a fascinating companion portrait to set beside his Richard II in Shakespeare’s play.” As for Gordon Daviot herself, she is “likely to do big things”, and her play is “curiously in tune with the present day” yet also “a convincing picture of life in the Middle Ages”. Richard of Bordeaux is one of “the chief successes of the present season” – and proof that “theatre is in a healthier state than for years.” I talk about Richard of Bordeaux in chapter 9 of my biography, exploring the connections with appeasement, how Gordon Daviot was inspired by not seeing John Gielgud’s performance as Shakespeare’s Richard II, and how it was hailed as the play that would stop theatre-goers from going to the cinema…

The Stage magazine was published monthly in New York, and edited by Hiram Motherwell. Cover star of this issue was Eva Le Gallienne, director of the Civic Repertory Theatre – articles inside talk about Le Gallienne’s current productions Alice in Wonderland and The Cherry Orchard, with a special feature “Miss Le Gallienne Fights it through” on the ‘temporary’ abandonment of the repertory plan of her company “due to the present economic situation”. Eva Le Gallienne ran the Civic Repertory Theatre for ten years, using a resident company of actors to present different plays. It became financially unviable to work this way because of the Great Depression, and the venture ended the year after this magazine was published, in 1934.

Eva Le Gallienne was known to Gordon Daviot: in the late 1930s, Eva had a relationship with actress and director Margaret ‘Peggy’ Webster, after Peggy moved to the US. Gordon Daviot had known Peggy since she had a bit part in Richard of Bordeaux, and Peggy then went on to appear in Daviot’s third play Queen of Scots. In my biography you can read more about Peggy, and the holiday Gordon Daviot spent with her and their group of friends – and how this contrasted with Gordon Daviot’s day-to-day life in Inverness.

Another friend of Gordon Daviot’s is also mentioned in the magazine: C.L. Anthony, whose play Autumn Crocus doesn’t get the best review (a “pallid fairy tale”). Like Gordon Daviot/Josephine Tey (whose real name was Beth Mackintosh), C.L. Anthony hid her identity behind a penname: she was really Dodie Smith, better remembered now for her books I Capture the Castle and The Hundred and One Dalmatians. Autumn Crocus was Dodie’s first play, and, despite the lukewarm review here, it was actually a huge success.

Perhaps Autumn Crocus just wasn’t to the reviewer’s taste: they certainly had a lot of plays to choose from that month – the theatregoer could go and see the new Noel Coward play Design for Living (“lunatic comedy”), or J.B. Priestley’s Dangerous Corner, Edna Ferber and George S. Kaufman’s Dinner at Eight (“somewhat pretentious”), actress Talullah Bankhead’s return to the stage in Forsaking All Others, or Fred Astaire in The Gay Divorce, opposite Claire Luce, who is also advertising Lux Toilet Soap (“marvellous for keeping the skin beautifully smooth”) in this issue. 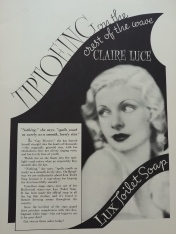 Luce was of course replaced by Ginger Rogers in the later film version of The Gay Divorce, though some of the music by Cole Porter remained. It was a pretty stellar choice of plays available in New York in April 1933. “You can usually obtain tickets at the box office, but… if… you are taking your dinner-party to the theatre and must have last-minute seats, in the front rows, for a sell-out hit” the magazine helpfully gives the names and addresses of “these brokers who specialize in this field”. Brokers might charge for their services though: 82 cents (75 cents plus a seven-cent tax).

Some of the articles and plays are very much ‘of their time’. Fans of Gordon Daviot / Josephine Tey can be keen to see as her as ‘modern’ in her thinking on diversity, relationships and sexuality, but she was, of course, as much a product of her time as anyone. The novelist and critic Jessica Mann drew attention to “accusations of snobbery and anti-Semitism, failings that were very common in [Tey’s] generation”, and in the Josephine Tey novels there are certainly passages that make for uncomfortable reading nowadays: the scene around the dinner table in The Man in the Queue – or the original proposed title for that novel – or the description of Serge as being rather like a village idiot in To Love and Be Wise. Certainly Tey / Daviot was more questioning of received attitudes than some of her contemporaries, but she was writing in the 1930s, 40s and 50s. There are articles in this magazine that I would be uneasy quoting from: their review of “Run Little Chillun!”, for example, with its pronouncements on the difference between black and white actors and descriptions of spirituals.

One of my favourite things from the old magazines and play booklets I’ve collected are the adverts. They are often a stark reminder of how times have changed. Readers of The Stage could “Learn to be Charming” with “A Finishing School at Home” – personalized training by correspondence. Or plan to stay over in town after their theatre trip in “The Plaza, New York – offering its guests the unique privilege of quiet atmosphere with accessibility to fashionable shops”. $85.00 for “The last word in a well-rounded town suit” seems like a good deal when you can “base your whole wardrobe on it!”, though the “best new deal of the Spring” is apparently a year’s subscription to The New Yorker.

Alternatively, readers might be planning a trip further afield, to Germany: “Europe’s really interesting and many-sided country, offering the fadeless past and the mighty present unrolled before your eyes in pageantries of ever richer hue… write for booklet 48… from the German Tourist Office”. Many-sided indeed: Adolf Hitler had just been made chancellor three months earlier, and in April the Gestapo was established.

When reading for entertainment, there’s sometimes a question over how much texts from the past should be edited. I spoke about Josephine Tey’s writing at the excellent Bodies from the Library conference at the British Library a while ago, and they have a good article on their blog about this dilemma, “Bounders, Cads and Gender Politics.” After a long and detailed discussion, they decide that “the modern reader, when venturing into Golden Age [crime fiction]… must tune in to the tone of conversations reported to understand the many unfamiliar terms bandied about so casually and equally must avoid applying modern cultural mores to a different time and place”

We’re reading this from the future, of course, but The Stage magazine also has an interesting article by the editor on how long it will be before there can be good plays about the First World War, the twenties and the thirties: “The confused emotions of today’s stirring events have too much dramatic value for the stage. Their dramatic utility appears only after reflection has sifted and proportioned them, and memory has distilled their primary human meaning…”

I love reading biographies which give good background on the times that people lived in. I think this is the only way to truly understand someone: a sociological approach to biography. Recently I’ve enjoyed Lucy Wordley’s detailed Jane Austen at Home for example, which “leads us into the rooms from which our best-loved novelist quietly changed the world”, or Taras Grescoe’s Shanghai Grande, which is not just the story of the life of Emily ‘Mickey’ Hahn but the story of a hotel, a city, and a moment in time.

Earl Young, who sent me this wonderful magazine, drew my attention to the advert on the back page: “a motor car of unquestioned prestige… the Cadillac” – which he says is sadly no longer available!

I’d like to end with the article on “What the well dressed play is wearing”: Talullah Bankhead’s short sleeves “with the chic look of having been pushed up” and Miss Ilka Chase in “the smartest ensemble of all”.

The Connecticut book group asked me what I would talk about with Josephine Tey if we met today: since she never really liked to discuss her writing, perhaps we could talk about our mutual love of these wonderful 1930s fashions…

Thank you very much to Earl Young, Bernie Pitterman and the other members of the Connecticut book group.